Shore fishing is probably the most practiced kind of fishing in the world, being it accessible by everyone. 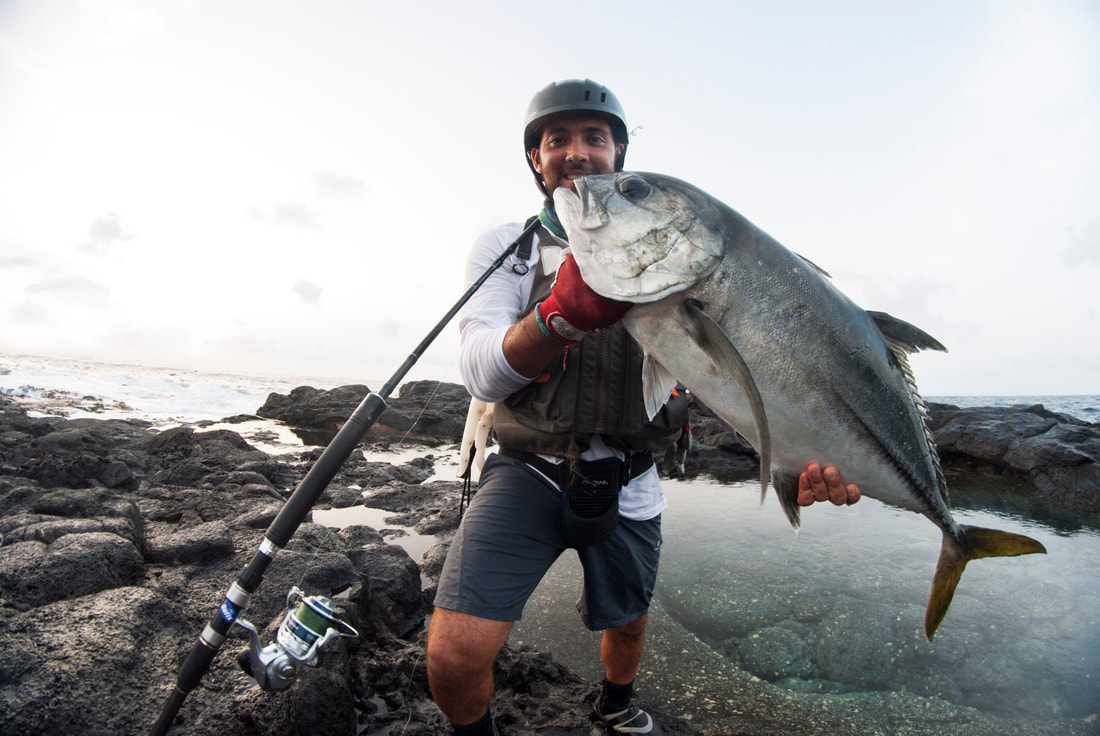 Both saltwater shore fishing and freshwater shore fishing can give the angler the chance of a great catch, with no need of a boat, if on the right place and other factors.
​It is also necessary to say that the quantity of possible techniques to practice from shore is very huge and on this page will talk about some of them. Saltwater shore fishing for predators with artificial baits will be out focus. Spinning, Jigging and popping in particular.
Fish species
While some species are present on the coast of every sea and ocean, also known as cosmopolitan species, the presence of the biggest part of them is closely related to a specific area or to a series of factors. Those factors usually are the latitude, the temperature of the waters, the structure of the coast, the depth, the geography (islands, peninsula, gulfs, archipelagos, underwater banks), the presence of currents etc. Sometimes even the behave of the same fish species, may be different from a place to another one, as they probably adapted to different conditions.

Is also interesting to note that, while some species may be found all around the globe, some in large areas (just in the Indian Ocean or just in the tropical part of the Atlantic ocean) other are endemic of a certain, small area and is possible to target them only with a dedicated fishing expedition to their native area.

Fish Species of Cape Verde
Staying close to our target area,  Cape Verde and that area of the Atlantic ocean, the species that is possible to hook fishing off the rocks are Amberjack, Almaco Jack, Horse Eye Jack (or Big Eye Jack), African Pompano, Black Jack, Blue Runner regarding just the Caranx family. Other species that is possible to fish from shore are the Island Grouper, the Cubera Snapper, the Skipjack Tuna, the Mahi Mahi (Dorado), Triggerfish, Barracuda, just mention few of them.
Many species of Sharks are always ready to grab an artificial bait (or an entire live fish), confirming their Tax-man reputation. Being more ambitious, casting from the coast is possible to go shore fishing for Marlin, Wahoo and Yellowfin Tuna in Cape Verde. 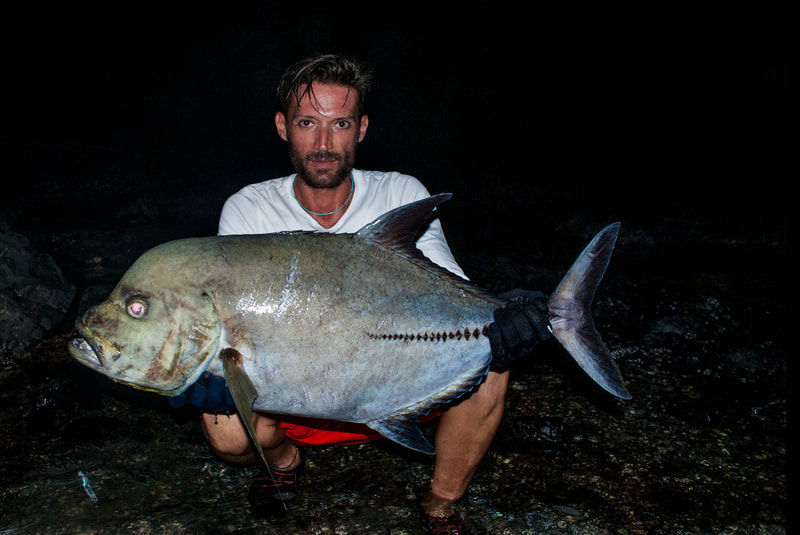 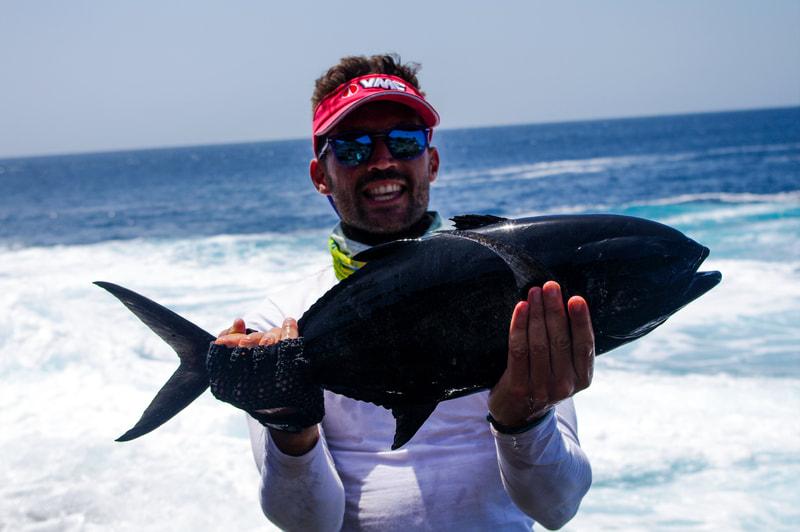 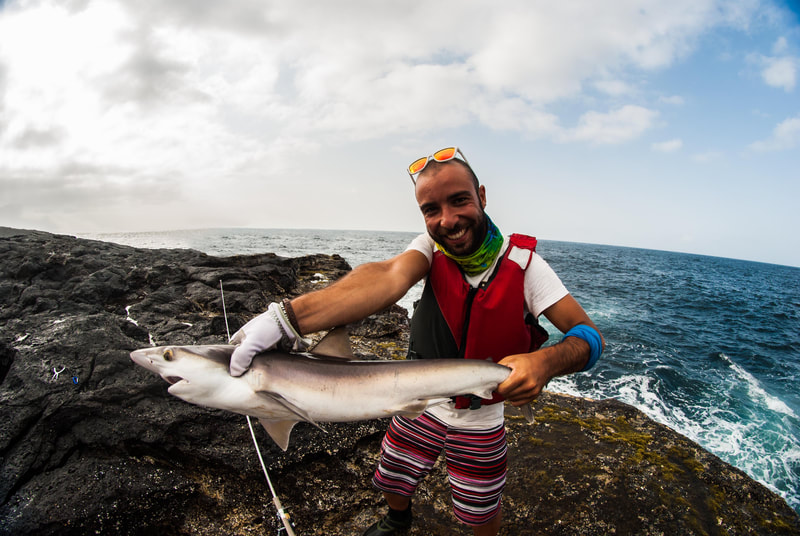 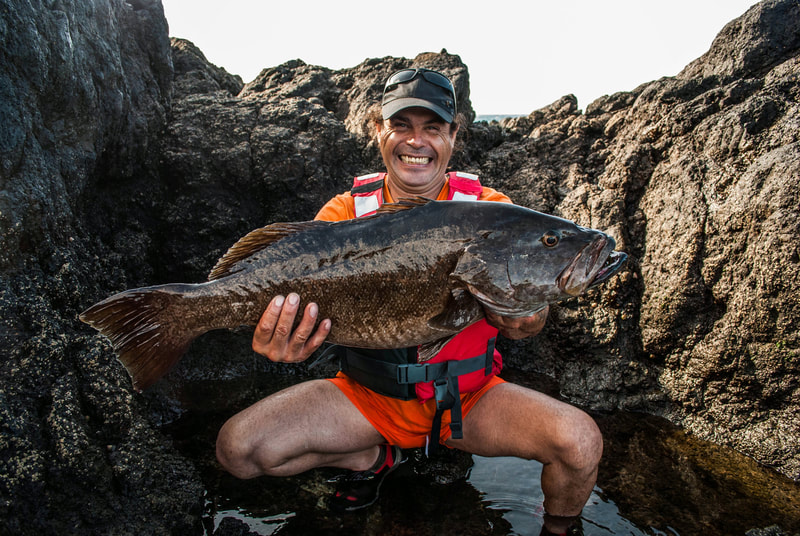 ​Shore Fishing Spots
Cape Verde offers a good variety of solutions when it comes to talking about fishing spots. From the interesting sandy beaches to the high cliff, passing by shallow rocky flats, pieces of coast with a mix of them, and even some decks may be considered a good spot based on the weather and angler preference.
A rocky shore with a good compromise between accessibility and water depth is what may be considered the best environment, because of the variety of possible preys. Everything is more unpredictable from a cliff.

CVS Fishing Spot Research
Our work over the years has been to carefully check the accessibility of many of the most productive-looking pieces of coast of this part of the Atlantic ocean. Fortunately for our guests, we manage to safely and easily access many of them to fish.
A typical shore fishing spot, on the rocky cliff in Cape Verde, has a safe position against the waves and the movements of the tide. The angler position compared to the water is also important, in order to allow a correct landing of a big fish; at the same time, a comfortable height from the water let the angler move the baits in the proper way.

Fishing equipment for shore fishing
The equipment for this kind of shore fishing requires some attention to the details and some suggested items for both comfort and safety.
About the fishing gear for shore fishing is necessary to say that the equipment is related to the target and possible fish of the area???
Cape Verde is considered one of the best fishing in the world together with the most expensive and complicated to reach shore fishing Ascension island. However, in Cape Verde, there are few Gamefish, which may be considered second only to the famous Giant Trevally (Caranx Ignobilis) or GT as it is commonly called between worldwide anglers. The fish we are talking about are the Horse eye jack (Caranx Latus), the Black Jack (Caranx Lugubris) and the African Pompano.
These fish allow us to dimension our equipment just a bit lighter, for more agile fishing but not less intense fightings.
This gives an advantage when it comes to fighting and land a Caranx from shore, considered that is much more complicated, compared to fish them on top of a moving boat.
Drag setting, leaders and the whole approach have to be different; usually heavier. On the other hand, these differences give to the angler, even to the most experienced one, a different, crazy, feeling, making the "feet on the mainland" the real game-changer!! 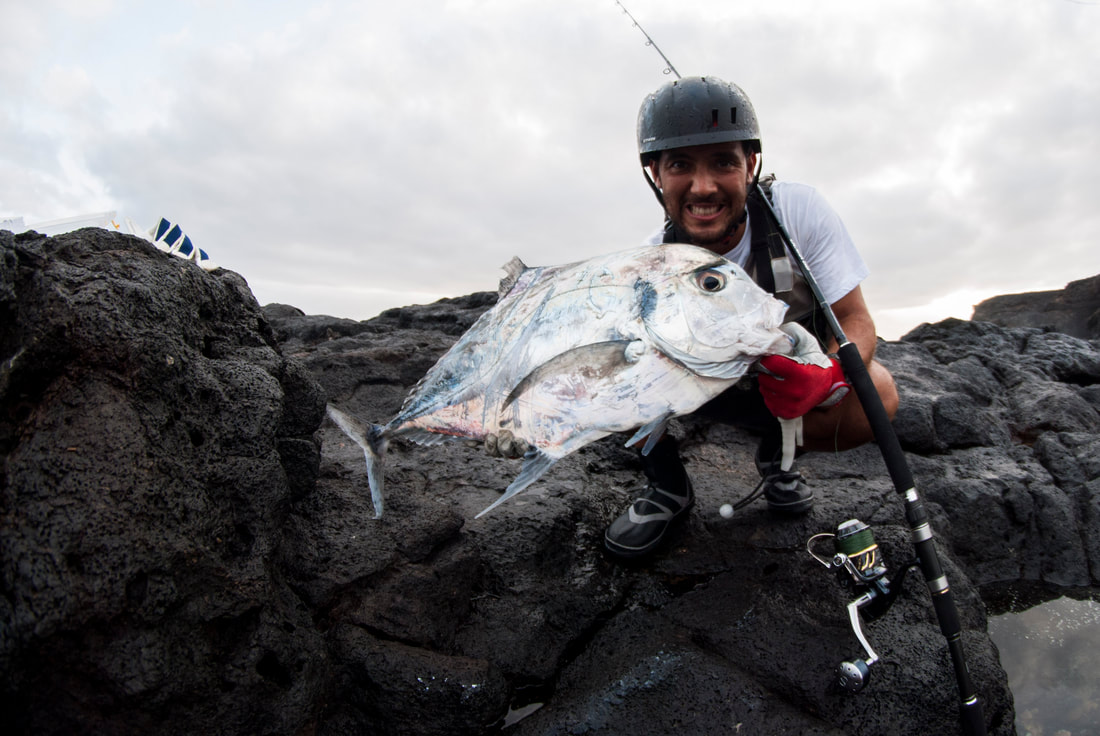 ​Fishing Action
When you first approach this kind of game fishing from shore, not all moves are obvious.
Set the hook.
Right after the bite, that may be a rush or an explosion if you fishing topwater, is fundamental to properly set the hooks (or the triple hooks) in the tough fish mouth.

The fight
This is a very important part as every species behave differently once hooked. often, even the same specie, in relation to the spot and the sea conditions may react irregularly. This makes fundamental to have a "plan" of the fighting action when fishing a new spot.

Some fish like the Horse Eye jack or the Black Jack, tend to run away in a lateral direction, compared to the angler position, having a high risk for our line to be cut if not contrasted correctly, especially with sized fish.
A good reaction when this happens is to move, "walk" or "run" (depending on the spooling speed and the fishing spot!!) in the same direction of the fish to not stress too much the line, especially if already touching the rocks. Those moments are made of pure adrenalin!
In a second moment, to try to "turn the head" of the fish may be the solutions to let the opponent go in a safer preferred direction. Usually, the follow a running direction once they get it.
Is always necessary to have a mate or a guide with you, giving constant directions on where to put your next step and maybe holding you from the fighting belt, if needed.
Another fight is to expect when an Almaco jack or an Amberjack is on. They are famous to quickly try to get free by rubbing the mouth on the bottom. Running fust and around submerged rocks is also usual for them, once hooked. 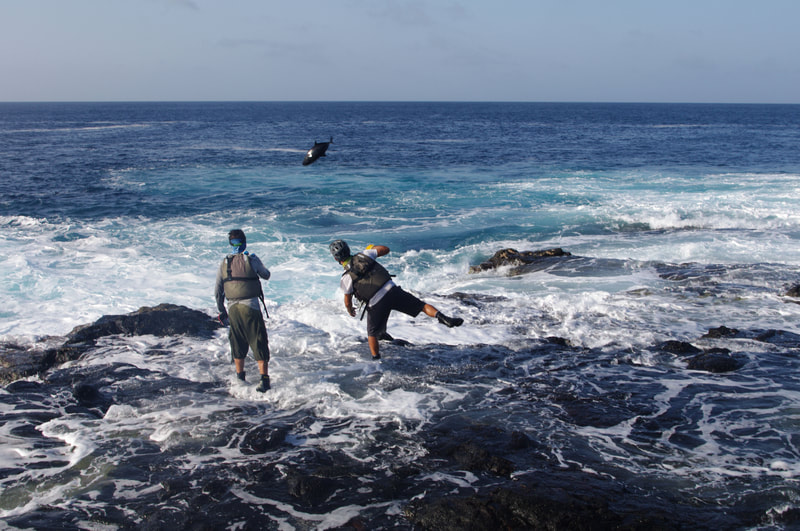 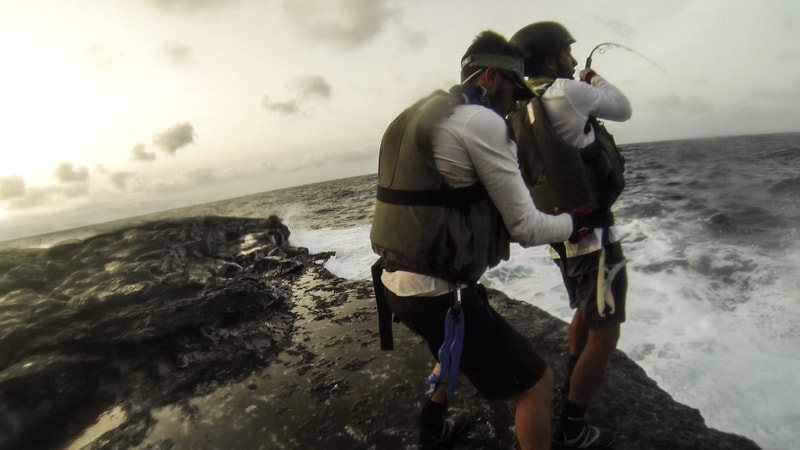 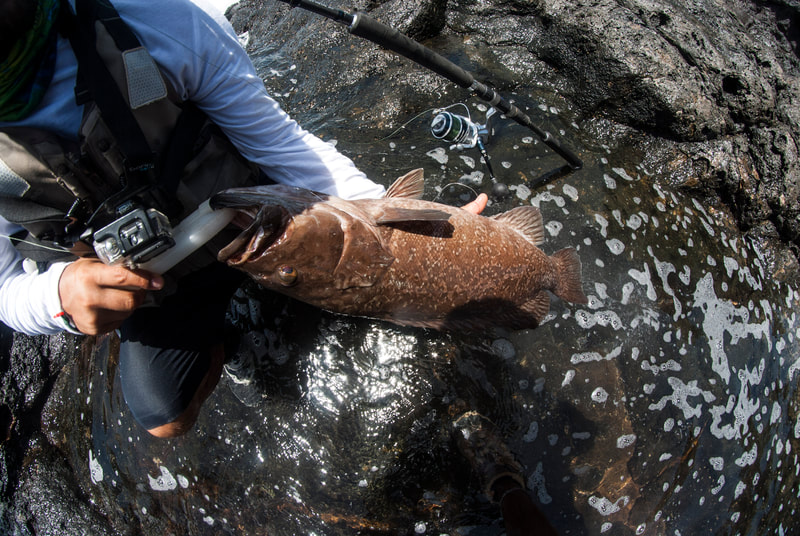 ​Landing the fish
This is a crucial part when fighting all of the mentioned Caranx family species off the rocks. Often they manage to arrive steady right under the edge of the cliff, and with a reserve of energy for the last reaction. This may result decisive as a wrong turn, a hesitation, with the help of the wrong wave, can result in cutting the line right under our feet, frustrating all our efforts and damaging the fish.
One of the main problems when shore fishing a rocky cliff is the reduced angle between fisherman and gamefish. This may cause the line sliding on the rocks, and the braid has a limited time when this happens. So close, so easy to run away!
The right moves with the rod sometimes, patience, cold blood and the help of a mate usually are the only way to free the line.
Over the years we discovered that, in reality, only a good quantity of experience with the instructions "real-time" of a good mate or guide can help to catch the monsters in question, avoiding those bad moments and the following imprecations...!

We support catch and release, consequently encourage to not use gaffe, harpoons and similar items. Instead, to choose the correct fishing spot, evaluating the allowing circumstances and good teamwork is the way to sportively land (almost) every big fish!